Mistress of Science: The Story of the Remarkable Janet Taylor, Pioneer of Sea Na

The first biography of the remarkable Janet Taylor, a nineteenth-century navigator and mathematician who left an incredible mark on the male-dominated field of sea navigation

It is hard to imagine a more male-dominated field in the nineteenth century than sea navigation. This was the high-point of the British Empire and sea navigation drove it. Yet in the midst of this domain Janet Taylor emerged as a young woman able to match the best male minds in the field. She was one of the most remarkable scientists of the period, and yet until now her story has not been told. A gifted mathematician, astronomer, author and instrument maker, she also possessed extraordinary skills as a teacher of navigation and businesswoman.The sixth of eight children, Janet Taylor was born in 1804, in Wolsingham, County Durham. By the age of nine her outstanding intellectual abilities were already apparent and she was awarded a special scholarship by Queen Charlotte. She then continued her education in languages, science and mathematics. In so doing, she overcame her humble beginnings and became one of the most prominent figures in the nautical world. The only woman in over 200 years to patent a nautical instrument, her journey led her to extraordinary heights and earned her the respect and admiration of her contemporaries. She excelled and maintained a position of leadership in her chosen profession for over thirty years, as well as raising a family of eight children and three stepchildren. A woman far ahead of her time, this is the story of Janet Taylor’s modest beginning and her incredible rise to prominence.

Be the first to review “Mistress of Science: The Story of the Remarkable Janet Taylor, Pioneer of Sea Na” Cancel reply 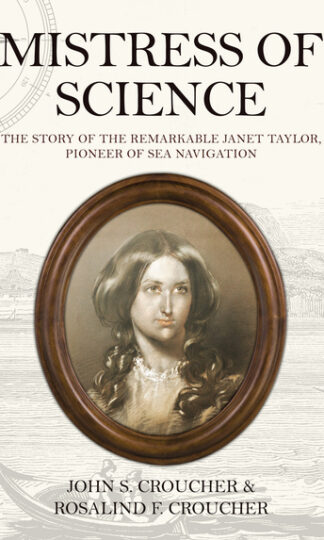 You're viewing: Mistress of Science: The Story of the Remarkable Janet Taylor, Pioneer of Sea Na £20.00
Add to basket
This website uses cookies to improve your experience. We'll assume you're ok with this, but you can opt-out if you wish.Accept Read More
Privacy & Cookies Policy