‘If you’re looking for a good spy thriller, I definitely recommend this’ Daily Express
The thrilling real-life story of a double agent in the Second World War

SHORTLISTED FOR THE COSTA BIOGRAPHY AWARD‘Engrossing as any thriller’ – Daily Telegraph‘Incredible’ Sunday Telegraph‘Superb. Meticulously researched, splendidly told, immensely entertaining’ John le CarrÃ©_______One December night in 1942, a Nazi parachutist landed in a Cambridgeshire field. His mission: to sabotage the British war effort. His name was Eddie Chapman, but he would shortly become MI5’s Agent Zigzag. Dashing and suave, courageous and unpredictable, Chapman was by turns a traitor, a hero, a villain and a man of conscience. But, as his spymasters and many lovers often wondered, who was the real Eddie Chapman?Ben Macintyre weaves together diaries, letters, photographs, memories and top-secret MI5 files to create an exhilarating account of Britain’s most sensational double agent.

Be the first to review “Agent Zigzag” Cancel reply 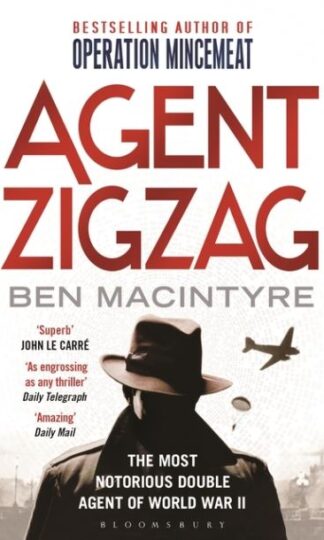