Arianwyn fluffs her witch’s assessment – instead of qualifying, she’s declared an apprentice and sent to remote Lull in disgrace. Then her arch-enemy, mean girl Gimma, arrives on holiday determined to make her life a misery. But as a mysterious darkness begins to haunt her spells, Arianwyn realizes there’s much more than her pride at stake …

‘The Apprentice Witch is entirely more charming, adventurous, and full of heart than a book has any right to be.’ TRENTON LEE STEWART

Arianwyn fluffs her witch’s assessment. Awarded the dull bronze disc of an apprentice – to the glee of her arch-rival, Gimma – she’s sent to protect the remote, dreary town of Lull.

But her new life is far from boring. Turns out Gimma is the pompous mayor’s favourite niece – and worse, she opens a magical rift in the nearby forest.

As Arianwyn struggles with her spells, it’s soon clear there’s much more than her pride at stake ?

Be the first to review “The Apprentice Witch” Cancel reply 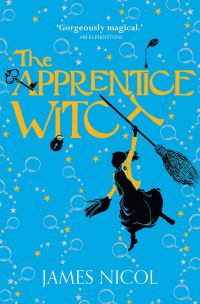