Eye Of The Day

ÂA remarkable coming-of-age story, told in a stunning voice
that beguiles and enchants on every page’. Author Ruth Ozeki

“Remarkable ? told in a stunning voice that beguiles and enchants on every page.”?Ruth Ozeki, author of A Tale for the Time Being

“Exceptionally bold, beautiful, original and humane.”?Joanna Kavenna, author of The Birth of Love

It begins with an explosion.

In a small American town in the 1930s, Amos?a quiet giant of a man with a heroic spirit and a troubled past?is partly blinded in a locomotive accident. Aubrey, a sheltered boy whose patrician New England family employs Amos as a handyman, rushes to his aid.

As though heralding the twentieth century’s worst cataclysm, this disaster inaugurates an epic story of war, friendship, and destiny. Over the next ten years, in the mountains and forests of North America and on Europe’s bloody battlefields, Amos’s and Aubrey’s trajectories converge mysteriously. These chance meetings deepen their bond and shape their lives in profound ways.

The Eye of the Day boasts a sweeping scope and a rich cast of characters that range from tragically dispossessed souls to some of the most illustrious (and notorious) names of the last century. Riveting, action-filled scenes alternate with exquisite meditations on nature, and the precarious ties that bind even the unlikeliest people together are rendered with sagacity and warmth.

Dennison Smith is a novelist, poet, and playwright. Originally from Chicago and Vermont, she now divides her time between England and British Columbia. She is currently pursuing a PhD in Creative and Critical Writing at the University of East Anglia.

Be the first to review “Eye Of The Day” Cancel reply 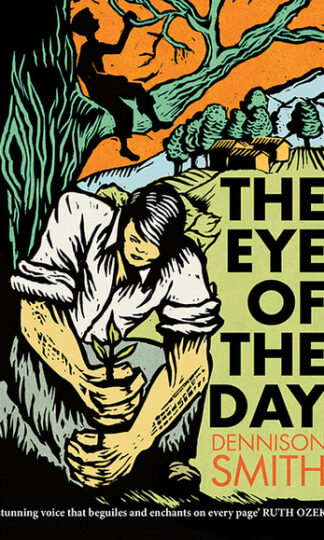