A Song For A New Day

Explores life in a world permanently locked down in the aftermath of a pandemic.

‘In A Song for a New Day, liberty and creative endeavour are compromised by political and socioeconomic reality. Pinsker presents a frighteningly real near-future US [and] movingly charts Rosemary’s coming-of-age story as her world and Luce’s collide’ Guardian

BEFORE
Luce is on the road. Success is finally within grasp: her songs are getting airtime; the venues she’s playing are getting larger. But mass shootings, bombings and now a strange contagion are closing America down around her…

AFTER
Rosemary is too young to remember the Before. She’s grown up in a world where proximity to others is not only unusual, it is also illegal. Life as she knows it is entirely online, virtual. But now she’s on the road, in the real world, searching for something that, until a few weeks ago, she never knew existed. 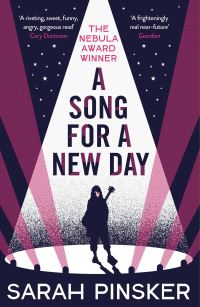