Restless Creatures: The Story of Life in Ten Movements

Despite the overwhelming diversity of life on earth, one theme has dominated its evolution: the apparently simple act of moving from one place to another. This book tells the incredible story of locomotion in human and animal evolution. Evolutionary biologist Matt Wilkinson shows why our ancestors became two-legged, why we have opposable thumbs, why the backbone appeared, how fish fins became limbs, how even trees are locomotion-obsessed, and how movement has shaped our minds as well as our bodies. He explains why there are no flying monkeys or biological wheels, how dinosaurs took to the air, how Mexican waves began in the animal kingdom, and why moving can make us feel good.

A billion-year history of movement,from bacteria to Olympic athletes.

‘Packed with revelations, scholarly but clear,Â Restless CreaturesÂ carriesyou from the kinetics of the amoeba to that of the blue whale, from theswim-cycle of spermatozoa, to why skipping works best on the moon. Apop-science treat.’ Gavin Francis, author of Adventures in Human Being

Despite the overwhelming diversity of life on earth, one theme hasdominated its evolution: the apparently simple act of moving from one place toanother.Â Restless CreaturesÂ is the first book for a generalaudience telling the incredible story of locomotion in human and animalevolution.

Evolutionary biologist Matt Wilkinson traces this 4-billion-yearhistory, showing why our ancestors became two-legged, how movement explains whywe have opposable thumbs and a backbone, how fish fins became limbs, how eventrees are locomotion-obsessed, and how movement has shaped our minds as well asour bodies. He explains why there are no flying monkeys or biological wheels,how dinosaurs took to the air, how Mexican waves were the making of the animalkingdom, and why moving can make us feel good.

Restless CreaturesÂ opens up an astonishing new perspective -that little in evolution makes sense unless in the light of movement.

Be the first to review “Restless Creatures: The Story of Life in Ten Movements” Cancel reply

"What a gift! This is bonkers! And here is why ind 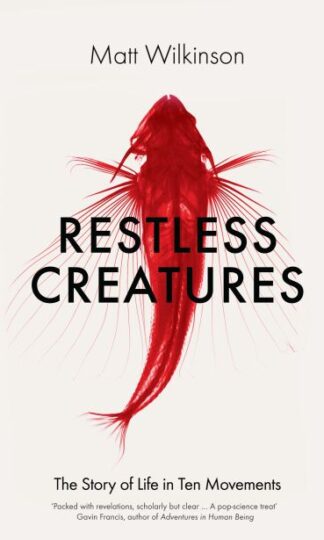