The Witness For the Dead

From the author of The Angel of The Crows and The Goblin Emperor comes the long-awaited return to the bestselling, award-winning, world of Maia, a young man of mixed Elven and Goblin heritage, who unexpectedly becomes Emperor of the Elflands.Â

When the young half-goblin emperor Maia sought to learn who had set the bombs that killed his father and half-brothers, he turned to an obscure resident of his Court, a Prelate of Ulis and a Witness for the Dead.

Thara Celehar found the truth, though it did him no good to discover it. Now he lives in the City of Amalo, far from the Court though not exactly in exile. He has not escaped from politics, but his position gives him the ability to serve the common people of the city, which is his preference.

Â He lives modestly, but his decency and fundamental honestly will not permit him to live quietly. 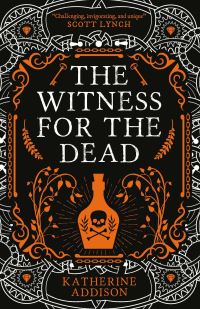