In this thrilling follow-up to The Nightjar, Alice must learn to wield her rare powers. But is magical London any safer than the version of London she left behind?

The Rookery, city of secrets, lies and magic, is facing destruction. But does Alice have the power to save her new home? And will she give her life to save its secrets?

When Alice discovered this alternate London, her life changed forever. She discovered she was seeing Nightjars – miraculous birds that guard our souls. But her newfound magic has a dark side. So in an effort to protect her friends, Alice is training to wield her rare abilities under House Mielikki – the House of Life. Yet something isn’t right. And after a series of attacks leaves her reeling, it’s clear someone wants her to fail.

Alice must plunge into a world of seductive magic and unimaginable perils to uncover the conspiracy. And when she discovers why the Rookery itself is at risk, she realizes the price she must pay to save it.

The Rookery is the dazzling, magical sequel to The Nightjar by Deborah Hewitt.

Praise for The Nightjar:

‘An unusual and exciting story . . . the plot explodes off the page’ TheBookbag

‘A magical adventure full of danger, betrayal, and devotion’ Booklist

Be the first to review “The Rookery” Cancel reply 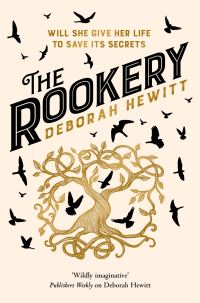