Lots of laughs on every level in the world’s most awesome treehouse! The ninth instalment in the number one bestselling Treehouse series by Andy Griffiths and Terry Denton.

There are lots of laughs at every level in The 117-Storey Treehouse, the ninth book in the number one bestselling Treehouse series from Andy Griffiths and Terry Denton.

Andy and Terry have added another thirteen levels of crazy fun to their every-growing treehouse (it used to be a 104-story treehouse, but it just keeps growing!) They’ve got a tiny-horse level, a pyjama-party room and an Underpants Museum and Treehouse Information Centre! But Andy and Terry have found themselves running from the Story Police and the only way to escape, is through the terrifying Door of Doom!

For as long as Andy and Terry have been writing books together, Andy has always been the narrator and Terry has always been the illustrator. But when Terry tries to prove that he can narrate as well as draw, the story goes completely out of control and the Story Police arrive to arrest the whole treehouse team for crimes against storytelling! Andy, Terry and Jill go on the run, but how long can they evade the Story Police and stay out of Story Jail?

Join the adventure that inspired the World Book Day bestseller, Terry’s Dumb Dot Story in this laugh-out-loud story told through a combination of text and fantastic cartoon-style illustrations. With 117 amazing levels to discover in the Treehouse series,

Well, what are you waiting for? Come on up!

Be the first to review “The 117-Storey Treehouse” Cancel reply 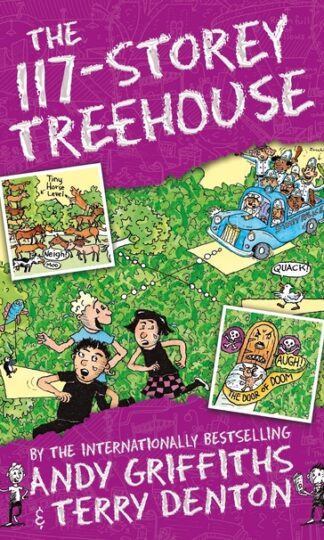