From number one bestseller and author of the Clifton Chronicles, Jeffrey Archer, Turn a Blind Eye is the extraordinary third novel featuring William Warwick

In the third instalment in the life of Detective William Warwick, following on from Hidden in Plain Sight, international bestseller Jeffrey Archer once again displays his mastery at the art of storytelling.

Detective Inspector William Warwick is tasked with a dangerous new line of work, to go undercover and expose corruption at the heart of the Metropolitan Police Force.

His team focuses on Detective Sergeant Jerry Summers, a young officer living an extravagant lifestyle. But Summers develops a personal relationship with a WPC on William’s team and the investigation hangs in the balance.

As his undercover officers draw the threads together, William realizes that the corruption may go far higher than his initial assessment, and that more of his colleagues than he thought possible might be willing to turn a blind eye . . .

‘If there was a Nobel Prize for storytelling, Archer would win‘ – Daily Telegraph

Be the first to review “Turn A Blind Eye” Cancel reply 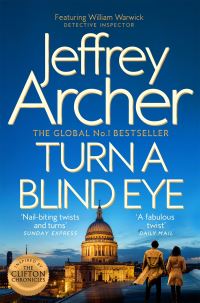