Sophy Ridge, who spends every day in Westminster as political correspondent for Sky News, has uncovered the extraordinary stories of the women who have shaped British politics, providing gripping insight into historical and contemporary stories which will fascinate not just those interested in politics but those who want to know more about women’s vital role in democracy.

Sophy Ridge, presenter for Sky News, has uncovered the extraordinary stories of the women who have shaped British politics.

Never has the role of women in the political world ever been more on the news agenda, and Sophy has interviewed current and former politicians including among others, Nicola Sturgeon, Ruth Davidson, Betty Boothroyd gain exclusive insight into the role women play in politics at the highest level. The book also includes Theresa May’s first at-length interview about her journey to becoming Prime Minister.

These interviews have revealed the shocking truth about the sexism that is rife among the House of Commons both in the past and today, with sometimes astonishing, and sometimes amusing anecdotes revealing how women in Westminster have worked to counter the gender bias.

Sophy provides gripping insight into historical and contemporary stories which will fascinate not just those interested in politics but those who want to know more about women’s vital role in democracy.

From royalty to writers and from class warriors to suffragettes, Sophy tells the story of those who put their lives on the line for equal rights, and those who were the first to set foot inside the chambers of power, bringing together stories that you may think you know, and stories that have recently been discovered to reveal the truth about what it is to be a woman in Westminster.

This book is a celebration of the differing ways that women have shaped the political landscape. The book also, importantly, sheds light on the challenges faced by women in government today, telling us the ways that women working in politics battle the sexism that confront them on a daily basis.

Be the first to review “The Women Who Shaped Politics: Fascinating Stories of the Women Who Influenced G” Cancel reply 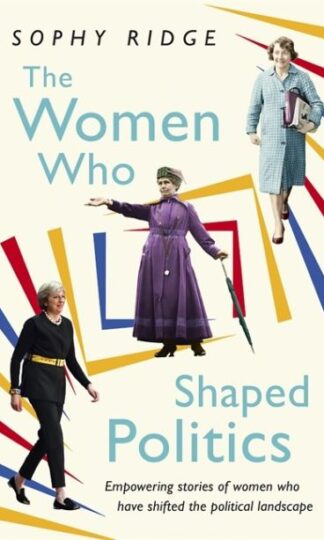 You're viewing: The Women Who Shaped Politics: Fascinating Stories of the Women Who Influenced G £20.00
Add to basket
This website uses cookies to improve your experience. We'll assume you're ok with this, but you can opt-out if you wish.Accept Read More
Privacy & Cookies Policy