Chilled: How Refrigeration Changed the World and Might Do So Again

Refrigerators, refrigeration and its discovery and applications provides the remarkable and eye-opening backdrop to ‘Chilled’, the story of how science managed to rewrite the rules of food, and how the technology whirring behind every refrigerator is at play, unseen, in a surprisingly broad sweep of modern life.

‘… a chill-cabinet of curiosities: hot stuff, and deeply cool …’Heat and fire have been at humanity’s command for at least 100,000 years, but we’ve been in control of the cold for barely one hundred. Why it took so long is quite a story. Figuring out the cold would involve some gnomes, a fake perpetual motion machine and a fresh chicken bought in a blizzard. Where did it get us in the end? First there’s the obvious – understanding cold has allowed us to rewrite the rules of food. However, there is much more to it than that. Space rockets, skyscrapers, medical scanners and even party balloons could not exist without the refrigerator. And today, refrigeration is still at the cutting edge as we seek to turn the science fiction of teleportation, immortality and conscious computers into scientific fact.In Chilled, Tom Jackson delivers the cold hard facts on refrigeration and our battle to keep things cool over the centuries, from the ice houses of ancient Persia to the present day, where a seemingly mundane whirring white box in the kitchen represents one of the genuine wonders of the modern age.

Be the first to review “Chilled: How Refrigeration Changed the World and Might Do So Again” Cancel reply 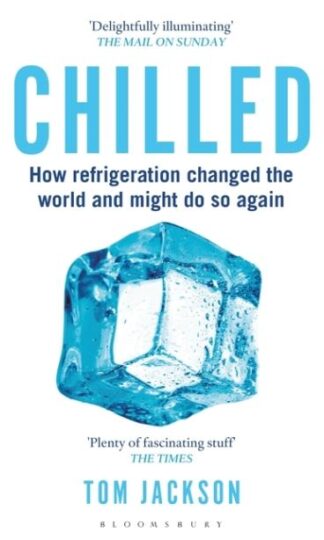