The Places In Between

The international bestseller: A brilliant account of Rory Stewart’s walk through war-ravaged Afghanistan. Now with illustrations and an afterword.

The Places In Between is Rory Stewart’s moving account of his death-defying walk across war-torn Afghanistan in January 2002.

Caught between hostile nations, warring factions and competing ideologies, at the time Afghanistan was in turmoil following the US invasion. Travelling entirely on foot and following the inaccessible mountainous route once taken by the Mogul Emperor, Babur the Great, Stewart was nearly defeated by the extreme, hostile conditions. Only with the help of an unexpected companion and the generosity of the people he met on the way did he survive to report back with unique insight on a region closed to the world by twenty-four years of war.

‘With a deft, at time poetic vividness, he describes an awesome landscape . . . His encounters with Afghans are tragic, touching and terrifying – Daily Telegraph

Winner of the Royal Society of Literature Ondaatje Award and the Spirit of Scotland Award.
Shortlisted for the Guardian First Book Award, the John Llewellyn Rhys Memorial Prize, and the Scottish Book of the Year Prize.

Be the first to review “The Places In Between” Cancel reply 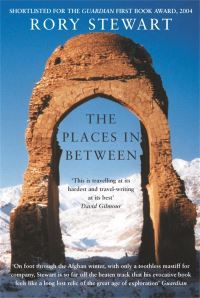