MI5 and Me: A Coronet Among the Spooks

When Charlotte Bingham, daughter of an obscure aristocrat, was summoned to her father’s office aged 18, she never expected to discover that this aloof, soberly-dressed parent was a spy. Even more ominous than The Facts was his suggestion that she should stop drifting around working for the sort of people her mother could never ask to dinner and get a proper job, something patriotic and worthwhile. So Lottie finds herself outside MI5’s Mayfair offices in a dreary suit, feeling naked without her false eyelashes. Miserably assigned to the formidable Dragon, Lottie wishes for pneumonia, or anything to release her from the torment of typing. But as another secretary, the serene Arabella, starts illuminating the mysteries of MI5, and Lottie’s home fills with actors doubling as spies, Lottie begins to feel well and truly spooked.

‘A Jilly Cooper heroine in a John le CarrÃ© world’ (Libby Purves, TLS); a beguiling comic memoir about a young woman who discovers her father is a spy (and was the model for John le CarrÃ©’s George Smiley) and goes to work as a secretary in 1950s MI5Much to her surprise, eighteen-year-old Lottie has just found out that her aloof, rather unexciting father is a spy. And now he’s decreed that she must make herself useful and get a Proper Job – so she’s packed off to MI5 herself, trussed up in a dreary suit. Luckily her delightful colleague Arabella is on hand to enliven the torments of typing and decode the enigmas of office life. But as Lottie’s home fills with actors doubling as spies, and Arabella’s mother is besieged with mysterious telephone calls, the girls start to feel well and truly spooked? A hilarious true story, and a unique window into 1950s Britain – where Russian agents infiltrate the highest echelons, where debutantes are typists and where Englishness is both a nationality and a code of behaviour – MI5 and Me is a sparkling comic memoir.

Be the first to review “MI5 and Me: A Coronet Among the Spooks” Cancel reply 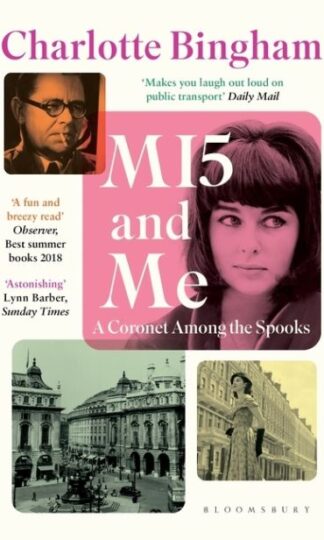