Tumult in the Clouds: The Centenary Collection

This is the story of one of World War II’s leading fighter pilots. Surviving the torpedoing of the SS Athenia, James Goodson took up flying Spitfires, Thunderbolts and Mustangs,and earned the reputation of ‘King of the Strafers’.

In 1918, the RAF was established as the world’s first independent air force. To mark the 100th anniversary of its creation, Penguin are publishing the Centenary Collection, a series of six classic books highlighting the skill, heroism esprit de corps that have characterised the Royal Air Force throughout its first century.

Anglo-American James Goodson’s war began on Sept 3rd 1939, when the SS Athenia was torpedoed and sank off the Hebrides. Surviving the sinking and distinguishing himself rescuing survivors, Goodson immediately signed on with the RAF. He was an American, but he wanted to fight.

Goodson flew Spitfires with an RAF Eagle Squadron before later joining his countrymen with the Fourth Fighter Group to get behind the controls of Thunderbolts and Mustangs where he became known as ‘King of the Strafers’.

Chock full of breathtaking descriptions of aerial dogfights as well as the stories of others of the heroic ‘few’, Tumult in the Clouds is the ultimate story of War in the air, told by the one of the Second World War’s outstanding fighter pilots.

Be the first to review “Tumult in the Clouds: The Centenary Collection” Cancel reply 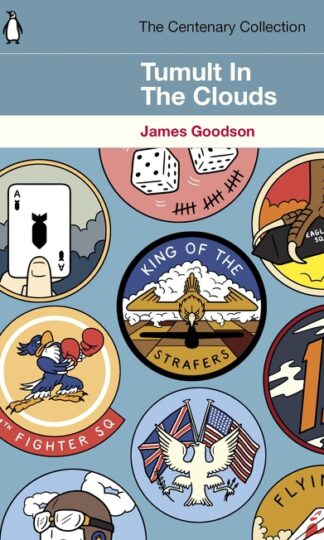