Explorers On the Moon

HergÃ©’s classic comic book creation Tintin is one of the most iconic characters in children’s books. These highly collectible editions of the original 24 adventures will delight Tintin fans old and new. Perfect for lovers of graphic novels, mysteries and historical adventures.The world’s most famous travelling reporter struggles to keep his feet on the ground as his adventures take him to the moon!Following on from the events of Destination Moon, Tintin finds himself in a rocket on a collision course with the moon. And with Snowy the dog, Captain Haddock, Professor Calculus and the Thompson twins aboard, things quickly spiral further and further out of control.The Adventures of Tintin are among the best books for readers aged 8 and up.HergÃ©Â (Georges Remi) was born in Brussels in 1907. Over the course of 54 years he completed over 20 titles in The Adventures of Tintin series, which is now considered to be one of the greatest, if not the greatest, comics series of all time.Â Have you collected all 24 graphic novel adventures?Tintin in the Land of the SovietsTintin in the CongoTintin in AmericaTintin: Cigars of the PharaohTintin: The Blue LotusTintin: The Broken EarTintin: The Black IslandTintin: King Ottakar’s SceptreTintin: The Crab with the Golden ClawsTintin: The Shooting StarTintin: The Secret of the UnicornTintin: Red Rackham’s TreasureTintin: The Seven Crystal BallsTintin: Prisoners of the SunTintin: Land of Black GoldTintin: Destination MoonTintin: Explorers of the MoonTintin: The Calculus AffairTintin: The Red Sea SharksTintin in TibetTintin: The Castafiore EmeraldTintin: Flight 714 to SydneyThe Adventures of Tintin and the PicarosTintin and Alph-Art.

Be the first to review “Explorers On the Moon” Cancel reply 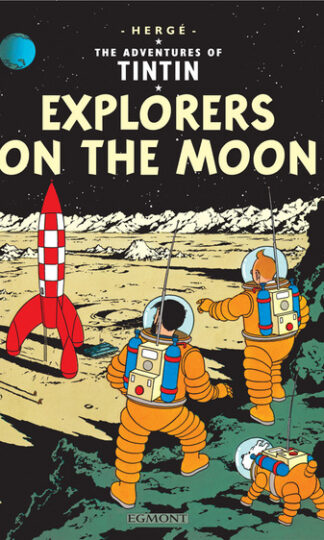