Sheldon Horowitz, an ageing ex-Marine, rescues a young Balkan boy – two strangers on the run, trying to survive against a strange and foreign landscape.

He will not admit it to Rhea and Lars – never, of course not – but Sheldon can’t help but wonder what it is he’s doing here…

Eighty-two years old, and recently widowed, Sheldon Horowitz has grudgingly moved to Oslo, with his grand-daughter and her Norwegian husband. An ex-Marine, he talks often to the ghosts of his past – the friends he lost in the Pacific and the son who followed him into the US Army, and to his death in Vietnam.

When Sheldon witnesses the murder of a woman in his apartment complex, he rescues her six-year-old son and decides to run. Pursued by both the Balkan gang responsible for the murder, and the Norwegian police, he has to rely on training from over half a century before to try and keep the boy safe. Against a strange and foreign landscape, this unlikely couple, who can’t speak the same language, start to form a bond that may just save them both.

An extraordinary debut, featuring a memorable hero, Norwegian by Night is the last adventure of a man still trying to come to terms with the tragedies of his life. Compelling and sophisticated, it is both a chase through the woods thriller and an emotionally haunting novel about ageing and regret.

Be the first to review “Norwegian By Night” Cancel reply 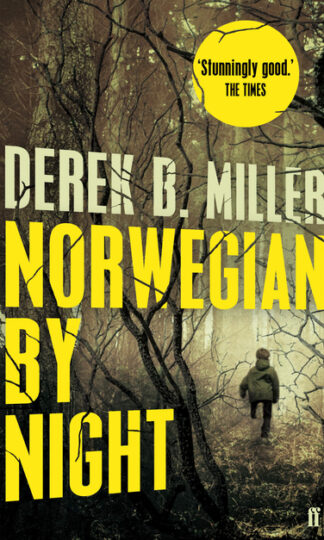