When a man’s arm is fished out of the Canal Saint-Martin in Paris, Maigret and his colleagues are puzzled. A woman’s arm they would understand as the work of a psychopath or a man’s body as a gang related killing, but they are even more puzzled when the rest of the man, minus his head, is dug out of the Canal. Maigret’s attention turns to Madame Calas, a strange woman running a bistro along with her husband near the canal. The husband is away in the country, Madame Calas willingly sleeps with anyone who asks (Maigret does not test this theory) and the judge soon arrests her, her lover (the main one), and a young delivery boy (also a lover). But Maigret is not satisfied and pushes further and uncovers a story, and a motivation for murder, that is far stranger than anything he has ever seen before.

‘His artistry is supreme’ John Banville

‘There was no lack of picturesque individuals in a neighbourhood like Quai de Valmy. But he had seldom encountered the kind of inertia he had seen in that woman. It was hard to explain. When most people look at you, there is some sort of exchange, however small. A contact is established, even if that contact is a kind of defiance.
With her, on the contrary, there was nothing.’

The discovery of a dismembered body in the Canal Saint Martin leads Maigret into a tangled, baffling case involving a taciturn bistro-owner and a mysterious inheritance.

‘One of the greatest writers of the twentieth century . . . Simenon was unequalled at making us look inside, though the ability was masked by his brilliance at absorbing us obsessively in his stories’ Guardian‘

Be the first to review “Maigret and the Headless Corpse: Inspector Maigret #47” Cancel reply 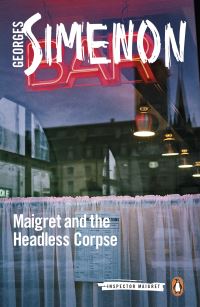