This is the story of Scott’s last expedition to the Antarctic. The author, the youngest member of Scott’s British Antarctic Expedition, relates the expedition’s departure from England in 1910 to its arrival in New Zealand in 1913.

The Worst Journey in the World is a gripping account of an expedition gone disastrously wrong. One of the youngest members of Scott’s team, Apsley Cherry-Garrard was later part of the rescue party that found the frozen bodies of Scott and the three men who had accompanied him on the final push to the Pole. Despite the horrors that Scott and his men eventually faced, Cherry-Garrard’s account is filled with details of scientific discovery and anecdotes of human resilience in a harsh environment, supported by diary excerpts and accounts from other explorers. A masterpiece of travel writing, The Worst Journey in the World is the most celebrated and compelling of all the books on Antarctic exploration.

Be the first to review “Worst Journey In World” Cancel reply

A massive debt of gratitude to all the authors and

Thank you to @writerhannahbt for popping in to sig 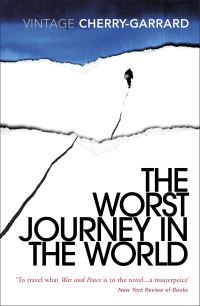